This is ‘concept’ writ large, deep, wide and imposing.

Straight away when looking at this album we had better get one word introduced into the mix : ‘concept’. You’ll be hearing that a lot over the course of this review. The album is not only a concept album in and of itself, but it also forms the first installment in a greater overall conceptual arc of which this is only the first chapter. The first chapter in terms of recording that is, but not necessarily the first chapter in the story itself, which we are told may yet involve sequels, prequels and side stories. So you can pretty much gather straight away that we’re not really talking about Ramones territory here. This is ‘concept’ writ large, deep, wide and imposing.

Let’s look at the band first, however. Atom Works are based in Helsinki, Finland, though only four of the five members are actually Finnish. The fifth, frontman Steve Baker, is actually English and, as such, is responsible for all of the lyrics and the conceptual ‘heavy lifting’. This is the band’s debut release, and musically if falls roughly under the ‘progressive metal’ tag which has been used widely to describe the band, although this is much more towards the ‘progressive’ end than the ‘metal’. In terms of Dream Theater, this is much more Scenes From A Memory than Train Of Thought, to use a comparative example.

Now, back to that pesky concept – and bear with me here because this is just a very brief overview of a rather complex construction. The overall arc concerns Atom Works themselves – no, not the band members in reality, but their alter egos in this universe if you like, which are a shadowy cabal of people seeking to gain the secrets of a number of people born with extraordinary special abilities, and to ultimately harness them against an aggressive force which should be further explained later on in proceedings. The first ‘super human’ we meet is the central character of this story, ‘Spice’, a father to three sons in India who has lived much longer than one would expect an ordinary man’s lifespan to be. His wife, the boys’ mother, has disappeared presumed dead, and the sons are travelling on the train from Bombay to Pashwar, her home, in 1934. While on the train they learn of a mysterious pendant which seems to be the source of their father’s abilities, and thus begins a murder mystery/ sci-fi/ adventure yarn, mostly set on the train, as they begin to scheme about ways to gain these powers for themselves. The Atom Works characters are in the background here, and the plan is for us to learn more about their identities and role in proceedings later.

So far, so ambitious for sure. Fascinating too, without doubt, as there are certainly a large number of prog fans who absolutely love a good old-fashioned concept album. Your humble scribe included, it has to be said. The main problem is that it is pretty hard to get a full grasp as to what precisely is going on. The vocals, while sounding very upfront and clear in the mix, somehow manage to be very tricky to decipher when you actually start trying to listen to exactly what is being related. The bits one gets are intriguing, but much is frustratingly elusive. This leads on to checking the booklet, which helpfully includes the full lyrics to this pretty wordy album, but again one becomes frustrated as the words are printed against a somewhat dark grey background and are not easy to read unless under extremely favourable light. Mind you, those younger than myself and not yet given to the use of reading glasses may have more luck there!

What of the music though? Well, on that score the news is good, as this is a pretty expansive and varied record. As previously stated, prog-metal elements are in the mix, of the Dream Theater and Rush persuasions, but there are also great dollops of neo-prog, symphonic and more angular compositional styles. One of the standout tracks, Perennial’s Prince, begins in a very ‘difficult’ Van Der Graaf sort of way, before unfolding into a more accessible mode, all within the course of seven superb minutes, and other fairly lengthy pieces such as the title track and the excellent Puppet Of The Three do likewise. If there is one track to hang one’s hat on in a commercial sense it would probably be The Atom Dance, which sounds as if it might be instrumental yet is far from it, being a key part of the story; however, it does possess what is at something of a premium on the album, namely a memorable chorus. Atom Works don’t really ‘do’ choruses. It’s probably part of their super-powers, although then again that may be the ability to read their own CD booklet!

The crowning achievement of the album is the climactic fifteen minute epic Beyond The Old, which goes through a number of sections, all of which are extremely cohesive and effective, before building to a truly anthemic ‘big’ ending. It sends the album out on a high, for sure.

Overall, this is an impressive debut. The greatest worry is probably over whether the band are over-reaching themselves with the ‘career concept’ meta-story angle, as that could become a trap to find themselves painted into a niche corner and alienate the wider audience. It can work of course – Magma got away with it and even invented their own language into the bargain – but on the other end of the scale Coheed And Cambria could be argued to have drastically limited themselves with their own complex over-arching interplanetary sci-fi epic which saw some people reluctant to dive in midway through, so to speak.

I really hope things work out for Atom Works, because when all is said and done one of the great joys of progressive music is the ability to be expansive enough to tell a story and fire the imagination. If a second installment is to follow – and I will be waiting with enthusiasm for sure – the only advice I would give would be to give more thought to the packaging design and tying it into the grand scheme of things in a slightly more symbiotic way. This sort of thing is what physical CDs or vinyl albums were made for, and I hope they grasp that opportunity.

Now, where’s that darned pendant of mine??

The Advent Equation – Remnants Of Oblivion (Self Released) 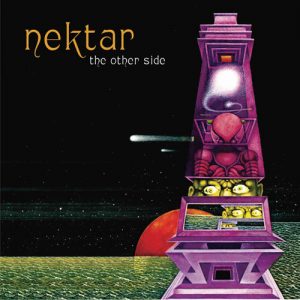