It is now three years since the ever impressive German power metal band Brainstorm released the magnificent Midnight Ghost which, by seeming popular appeal, was deemed to be the greatest album that the band had released. This is some praise indeed when we consider that the band was formed way back in 1989 and had released eleven monolithic slabs of power metal mayhem prior to Midnight Ghost of which any one album being more than capable of sitting at the top of any bands discography. Let’s just say that Brainstorm is a band that knows how to rock and is always guaranteed to deliver the goods and then some! The founding fathers are guitarists Torsten Ihlenfeld and Milan Loncaric with drummer Dieter Bernert and they have been ever presents since and always remain true to the Brainstorm ethos of delivering hard hitting quality metal. The first two albums really are exceptional but it was when the Symphorce vocalist Andy B Franck joined in 1999 that the band profile began to rise exponentially and when bassist Antonio Leva joined in 2007 it can categorically be stated that the dream team was in place.

Since then, the band has released a series of hard rocking, totally intense and powerful metal albums that helped to cement their position as one of the world’s leading exponents of power metal. The last couple of albums have been huge with On The Spur Of The Moment, Firesoul and Scary Creatures being three truly explosive metal delights which then led to the release of Midnight Ghost, an album for which there are simply not enough superlatives. However, Brainstorm is not a band to sit on collective laurels and they then had the formidable task of following up an album that was power metal perfection.

Of course, this is Brainstorm and we all knew that they do the impossible with ease and so we come to Wall Of Skulls which simply must be the power metal album of the year. If you are new to the band then be prepared for a veritable wall of sound with huge and earth shattering drums and bass over which Torsten Ihlenfeld and Milan Loncaric lay down searing guitar leads and riffs that hit with the power of a nuclear missile. All of this is played with a great deal of melody and quite delicious vocal harmonies but there remains a darkness with a portentous element to the sound too and so when the band flirts with symphonic metal, and they do frequently, then it is the dark and destructive metal that we get rather than the ethereal fey world of Tolkien epic so expect the sound of battle drums and war horns and an air of doom, despair and dark conflict.

Andy B Franck is absolutely sensational as the voice of Brainstorm and his powerful and deep vocals are essential to the trademark sound that we all know and love so well. Wall Of Skulls continues from where Midnight Ghost finished and they almost feel like the one work but split into two parts. The darkly delicious melodic metal remains at the forefront as the band plays with a power and intensity that few can equal yet there are still the trademark hooks throughout that makes the music so listenable and it draws you ever closer into their world. I’ve mentioned before that Brainstorm has a winning formula and you should never change what works so effectively. The boys in the band know this and fine tune their approach to deliver something new every time but always they remain within the core remit of the band. What we now have is a careful and considerate re-focus by the band so that everything seems to have just a little more intensity and sounds, well, just so much bigger. Intriguingly, Franck delights with a couple of duets featuring guest vocalists in Peter ‘Peavy’ Wagner of Rage and Sebastian ‘Seeb’ Levermann of Orden Ogan and he has produced the album too so is well versed in the way that Brainstorm works.

As usual, the songs are perfectly compiled and all delivered in devastating style with the usual togetherness, skill and energy that we expect from the band and they really have delivered a true monster of an album that takes power metal to a whole new level. If you are into Helloween, Accept, Bonfire and Gamma Ray then this is the band for you as they rock big style and deliver more thrills in a 50-minute album than most bands do in a lifetime. Wall Of Skulls has a great cover that totally catches the eye yet it is what is inside that is of utmost importance and the band has, yet again, delivered power metal perfection. 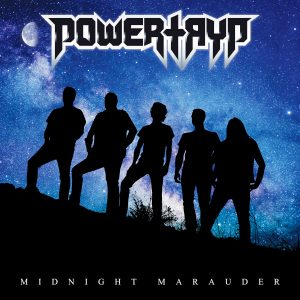