Sunday 20th June saw a select audience of 295 souls worshipping their heroes Caligulas Horse at Brisbane’s The Triffid (an old WW2 aircraft hangar). This was a Live after Lockdown streamed performance partly showcasing the band’s 2020 album Rise Radiant. As livestream products go, I have to say this isn’t of the highest standard – the picture wasn’t massively clear and maximum volume available was not much more than “quiet” – not how you want to hear live music, and making it hard to hear singer Jim Grey’s various introductions and banter. I don’t think it’s because this was beamed from Australia, because only last week I watched a similar production from Canada and the comparison is not flattering!

Be that as it may, its not the band’s fault! The opening track The Tempest is an impassioned, joyous celebration of being able to play live in front of real people. All five musicians have huge smiles on their faces, Jim Grey particularly happy to engage in banter with the crowd – this is a meeting up of old friends!

Next up is Slow Violence, also off Rise Radiant, altogether different, a staccato choppy arrangement, very tasty, very prog. Dream The Devil follows, from 2017’s In Contact and featuring a lovely, gentle, clean set of guitar chord progressions, it builds into a real epic, followed an impassioned plea from Jim: “If you want to hear live music, go and get f***ing vaccinated!”

Then we get Bloom, from 2018’s album of the same name, another surprisingly tender song. I’ve not previously heard much from this band and their almost pastoral, almost folksy approach to prog-metal is skillful, engaging and very refreshing – the audio limitations of the livestream notwithstanding! The band moves effortlessly into the second phase of the song with some great chord progressions – guitarist Adrian Goleby’s general style is somewhere between riffs and chords, but also very tuneful, accomplished, relaxed even, just enjoying playing. In the later phase of this song, it’s the turn of lead guitarist Sam Vallen to shine with a shimmering solo – the band are blessed with these two!

Valkyrie from Rise Radiant follows, its introduced with an exhortation to “get moshing in your living rooms” – and send in videos! Sam again leads wonderfully on the fretwork front.

Next is The Ascent, a true monster of a track, it sprawls over ten minutes of tasty chord progressions. The sound mix is crystal clear, and it needs to be given the complexity, emotion and subtle changes of mood of Jim’s lyrics and vocals. He works with subtlety and panache rather than raw power, in much the same way as The Pineapple Thief’s Bruce Soord as mentioned elsewhere – and both singers are totally captivating for it.

I love this song, for me it’s as good as prog-metal gets and just reaffirms what an extremely strong album Rise Radiant is (see Terry Craven’s glowing review for Velvet Thunder dated 30 September 2020).

In an unusual break, Jim has a bit of a political ‘soapbox stint’, which also serves to introduce him launching into the poetic, spoken, Inertia and The Weapon Of The Wall, which then itself introduces The Cannon’s Mouth, both from In Contact. This last is a meaty set of chords if ever there was one, Sam’s lead guitar floating above the power.

Salt is then introduced as a pean to overcoming the hard times we’ve all faced over the last year. Off the last album, its another whopping prog-metal tour-de-force, with power, melody, pace and space all intermingling. Great stuff!

After a final heartfelt thanks to everyone involved, the band finish with Graves, a 15 minute saga from In Contact. This probably captures everything Caligula’s Horse are about – changes of mood and melody, marked by peerless production and great musicianship. Go and hear them for yourselves!. 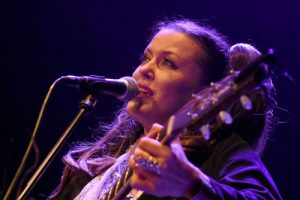