CARCASS’ founding vocalist/bassist Jeff Walker describes the track: “The song is a foot stomping festival anthem that will go unheard in an empty, vacuous, post covid world “stadium”, where used Lateral Flow Tests blow around as litter in the breeze.”

Ferocious and uncompromising in their execution, CARCASS’s ability to intricately dissect the innards of death metal and display them for us to sonically understand has been their point of excellence for over three decades. In 2019 the band released their first single in over 5 years Under The Scalpel Blade, followed by a 4-song EP in 2020 titled Despicable, setting a potent precedent for the full length album coming in September. With the album title referencing an old demo created by original drummer Ken Owen back in the ’80s, Torn Arteries sits as a bookend on the modern side of the CARCASS discography, connecting directly back to where everything began over 30 years ago.

The album artwork also rings reminiscent of the grotesque photography that appears on classic CARCASS album covers like Reek Of Putrefaction and Symphonies of Sickness. Artist Zbigniew Bielak travelled outside his normal wheelhouse to bring forth a time lapsed set of photos showing vegetables shaped like a heart, rotting over time upon a white plate. This form of artwork was influenced by Japanese Kusôzu, meaning: ‘painting of the nine stages of a decaying corpse.’ 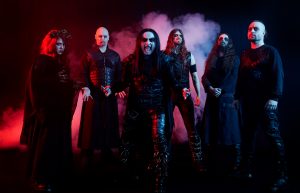 CRADLE OF FILTH | release stunning video for ‘How Many Tears to Nurture a Rose?’