WHAT THE MEDIA SAYS ABOUT TALLAH

“Fresh in an urgent way – with an extra jolt of modern anxiety”
Kerrang!

With the synergy between music and gaming becoming a more prominent topic, now is the time to showcase how successful such a marriage can be.

Tallah’s album ‘Matriphagy’ has been a worldwide success, amassing fans from all walks of life including influencers, gamers, and those within the wider entertainment world.  The band’s fresh take on nu-metal, since been dubbed as ‘Nu-core’, has inspired many artists, including DJ Hyper.

DJ Hyper, renowned for his work on the official Cyberpunk 2077 trailer, where his track Spoiler shot to fame, currently sits at over 23 million views. Hyper connected with Tallah‘s music instantaneously, deeming it worthy of the Cyberpunk treatment.

WATCH THE VIDEO FOR OVERCONFIDENCE – A CYBERPUNK DECONSTRUCTION BY HYPER

DJ Hyper says this about the remix.

“‘Having bought and loved Earache records since the early days (Godflesh especially),  and being inspired by Punk and Metal ever since, it was awesome to work on this Tallah record. I love in particular when Electronic music collides with guitars and this mix felt incredibly natural. Jumping between the tempos and working with their vocal was an exciting dynamic for me artistically. I wanted to see if I could try and reproduce the weight of the original but in my own way and I am more than happy with the outcome!! This is my favourite remix to date!’

Known for big production, a liberal use of live bass, guitars and uncompromising vocals, the last 2 years have seen multi award winning Hyper, become the spearhead of a new musical sound infiltrating the worlds of both the Electronic and Rock scene. Cyberpunk. (coincidentally, Hyper scored one of the major trailers for the recent Bladerunner 2049 movie)

Seen by Hyper as a territory with few rules, but one where both guitars and synths can coexist and push the boundaries without answering to genre binding stereotypes. Cyberpunk seems to sum up his sound perfectly. Hypers track Spoiler has become the bonafide anthem of the genre.  It was used to soundtrack the breakthrough trailer for the most hotly anticipated game, possibly ever, in Cyberpunk 2077.  The trailer went viral and the track has become probably the most copied (yes, ripped off) electronic track in the last two years garnering over 13 million plays on Spotify alone (where Hyper sees monthly individual listenership closing in on a half a million) and more than a few take down notices…

Earache Records has a history of fraternising with the gaming industry, having had partnerships with the company Five Vectors to make a soundtrack available with compatible games such as Fortnite, League Of Legends and more. Earlier this year – Tallah also featured at Glastonbury’s Lost Horizon event, embracing virtual reality technology, yet again crossing over into the interactive gaming realm.  Earache Records also released the game “Earache: Extreme Metal Racing” in 2006. Tallah‘s song  Overconfidence tackles the need to realise your flaws and grow to accept them, own them, and use them to become the best possible version of yourself.

For more updates follow the band on social media.

For more from the Earache Records roster, check out their website. 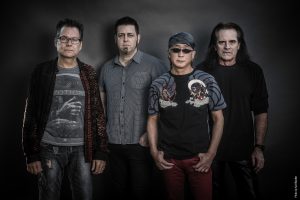