Edge Of Forever is a melodic/hard rock band from Italy and was formed in 2003 with Native Soul being their fourth release. They kept the same five man line-up for the first two albums, Feeding The Fire in 2004 and Let The Demon Rock ‘N’ Roll in 2005 but introduced some significant changes for Another Paradise which was released in 2009 and featured just Alessandro Del Vecchio on keyboards and drummer Francesco Jovino from the original band.

Del Vecchio also took on the role of vocalist as well as keys with new musicians Nik Mazzucconi on bass and Walter Caliaro on guitar coming in for this new release. We then had a 10 year hiatus and the band has now returned but with further changes, however, founding member, producer, singer and keyboardist Alessandro Del Vecchio remains and is now the only original member of the band although bass player Nik Mazzucconi (Labyrinth) remains from Another Paradise. To complete the new team he has brought in some very high quality musicians with guitarist Aldo Lonobile (Secret Sphere) and drummer Marco Di Salvia (Hardline) now firmly onboard. This is the first time I have come across the band and this version is definitely one to be reckoned with and when Alessandro Del Vecchio unleashes his talents then quality melodic rock is sure to follow. The previous vocalist was the talented Bob Harris (Frank Zappa/Axe) but Del Vecchio has now stepped up to the microphone and what a great voice he has too, is there no end to this man’s talents? His hallmark is stamped upon many of the Frontiers bands and he does bring much gravitas to any project and his is a name guaranteed to produce melodic rock of the highest order. The recruitment of Aldo Lonobile has been a masterstroke as he is such a talent and if you have not discovered Secret Sphere yet then they are a delight in waiting.

Native Soul is a quality melodic rock album overflowing with tracks of an epic nature and levels of musicianship to die for, quite simply, it is a fabulous album and sure to delight all those lucky enough to hear it. 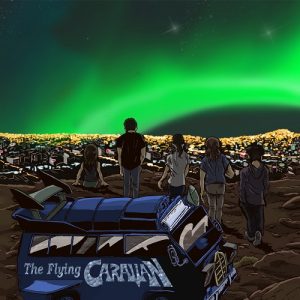 The Flying Caravan – I Just Wanna Break Even