Something Better is the current single by Austin, Texas based singer-songwriter and acclaimed guitarist Emily Wolfe. Taken from her forthcoming new album, Outlier, the song begins with a thrumming synth-pop beat that transforms into a buoyant rock tune with a hypnotic guitar melody, flawlessly showing off the confident, intriguing and always unpredictable nature of her new sound. Already A-listed at Amazing Radio, a video for Something Better was issued yesterday (14th May).

The colourful clip focuses on a fanciful day in Wolfe‘s life and utilises humour to tackle a difficult subject. The song describes the feeling of being stuck in a particular place or situation, with the video showing Emily performing mundane activities with a childlike and inventive twist, such as eating candy food ‘cooked’ in a toy kitchen.

“It captures the dream-like world I was in when I wrote the song,” explains Wolfe. “It adds a fun flare to a pretty heavy song and the intention was to balance out the serious nature of the lyric. Beth Garrabrant had this killer treatment and idea to pull a ’90s childhood theme into today’s world, which reflects a lot of the song, while the director Barbara FG really nailed the visuals. I love how subversive ’90s videos were, so that was another inspiration. It was amazing working with two really supportive, smart and creative women on this. My bass player Evan Nicholson and drummer Clellan Hyatt also brought their characters to life naturally. I think we all made something really great together.”

The ten new songs contained on Outlier explore Wolfe‘s diverse writing and guitar playing skills. Produced and co-written by Michael Shuman of Queens Of The Stone Age and Mini Mansions, the resulting body of work finds Wolfe upending the conventions of multiple genres, including rock and pop, ultimately arriving at a guitar-drenched sound that is wildly unpredictable and immediately magnetic.

After first seeing Wolfe ‘shred’ at a NAMM convention and subsequently monitoring her development, Epiphone recently unveiled her signature guitar, which Wolfe also helped to design. Its sleek black finish and vintage details were designed to make it look as though it was made for anyone and everyone.

The second album by Emily Wolfe, Outlier is built on exquisite tension: an endless push-and-pull between desire and resistance, determination and self-sabotage, the instinctive need to belong and the urge to strike out on one’s own.

For help in channelling that complexity of feeling, the Austin-based singer-songwriter and guitarist explored and obliterated the boundaries of rock-and-roll and modern pop, mining equal inspiration from the likes of Judas Priest and Ariana Grande in her bold but masterful genre-bending. After completing basic tracking for the songs, Wolfe and Shuman layered on new and unexpected textures with the help of programmed drums and beautifully warped synth tones. “Before this album, my approach was to know exactly what I was going to do when I went into the studio, but this time I wanted to leave room for a lot of creativity and weirdness,” says Wolfe. “In a way it felt like jumping into the unknown with a blindfold on, but I just trusted that the risk would pay off.” This shift in approach has essentially reshaped her identity as an artist.

“Making this record aligned with my journey as a person, and helped me grow into someone who no longer sees things in black and white,” she continues. “It taught me that I don’t have to try to fit into one box. I can take the energy of rock and blues, which is very on-the-fly and spontaneous and raw, and blend that with the polish of pop music, where everything is much more intentional. I feel like I’m a totally different musician now than I was five years ago, like I’ve grown into myself. I’m finally able to show people who I am and not be afraid of it.” 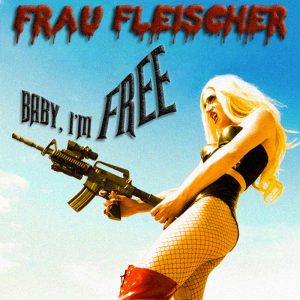