Hunted is a heavy metal band that formed in Cardiff in 2006 with a sound born out of NWOBM and Judas Priest and it was not until the 2010 that the debut Welcome The Dead was released.

Now, Hunted is not the most prolific band you will ever come across and it is a long eleven-years since the debut came out so album number two is well overdue, Of course, it hasn’t helped that the band took a break to recharge the batteries and, more importantly, refresh the line-up in between. The band has flirted with twin guitars in the past but they have now reverted to a straight forward four-piece with Chris G on vocals, Steve Barberini on guitar, Jon Letson on bass and Matt Thomason drums.

The core of the band’s sound is similar to the early NWOBHM movement but they are very much on the heavy side and there is even a touch of power metal in there which comes out when the power is cranked up and the music becomes just a little more frenetic. Chris G hits the high notes as per Rob Halford but has a slightly deeper register so the effect is a little more remarkable. Steve Barberini is a quite amazing guitarist in that he can churn out huge riffs and solos that hit straight between the eyes but he is also capable of moving and subtle passage and this can be best seen on the tender and emotional Our Final Embrace where his playing is intense and devastatingly effective. The drums and bass keep everything moving along at a pace and the gap between the two albums seems to have been put to good use as the band has returned fully revitalised and with a stunning set of new songs. The sound is a rich blend of Priest, Iron Maiden and Helloween and is classic old school hard rock at its best.

The CD also features a bonus track with a cover of Spanish band Angeles Del Infierrno’s Maldito Sea Tu Nombre which they deliver in Spanish and is a classic 100mph heavy metal romp. Sometimes, direct heavy metal is exactly what you need and Hunted deliver a stunning hard rock performance on Deliver Us which satisfies in so many ways. 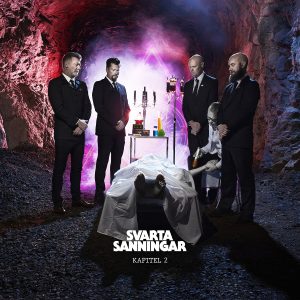