Love him or hate him, Geoff Tate is a legend. Nothing less. Having recorded 12 studio albums with progressive metal heavyweights Queensrÿche, at least five of which are immortal classics, 2012 was a turning point for Tate, who split with the band and started a new band, under the name of, hmm, Operation: Mindcrime. With that band, he released a trilogy of albums between 2015 and 2017, before, in 2019, a new project, featuring the vocal talent of Tate, surprised us all in a pleasant way. That band is called Sweet Oblivion and their second studio album Relentless, coming out on April 9 through Frontiers Music (you can read our review HERE), is the reason to reach Geoff for a short talk on Sweet Oblivion, the possibility of a Queensrÿche reunion and the failed Three Tremors project with Rob Halford and Bruce Dickinson.

Hello, Geoff. It is always an honour and a pleasure to talk to you. I hope I find you well?

Happy to hear that! So, first of all, how has your everyday routine changed during the pandemic, apart from obviously the lack of concerts?

-Oh, yes, the lack of touring is really the biggest challenge. I’ve been busy making music and I completed the Sweet Oblivion album and I’ve got three other albums in the works right now. Apart from that, spending time with the family and being very domestic, I suppose, haha.

The second Sweet Oblivion album Relentless will be released in a few days. In what ways was it different to work with Aldo Lonobile this time in comparison to Simone Mularoni on the first album?

-Very similar, really. I was in Ireland and Aldo was working in Italy, so we were using different studios and getting together on the internet, exchanging ideas and different sound files. We were sort of building the album in the virtual world, which is the usual way of doing it nowadays in the 21st century. I actually like it that way and I had a really good time making this record.

In my opinion, musically, the new album displays more identity and tries some new stylistic touches here and there, where the debut played more safely. Can you agree with that statement?

-Well it’s not really in my position to comment on that, being a part of the creative process. I’m not really the one to judging it and I don’t think it needs to be judged. I think everybody interprets and experiences music differently, based upon their one life experiences.

I can understand your point here and you have previously expressed such opinion as well. So, Sweet Oblivion looks like a studio project with different line-ups to work with you as a singer and lyricist. But, have you considered performing live with the Sweet Oblivion band once the pandemic is over?

-Maybe in a couple of years, when my schedule clears I would do something like that, but, gosh, right now, I start touring in June-July and I think I’m booked until Christmas of 2023! I will be very busy.

Wow, this sounds good. I really hope we can see you soon in Europe with this excellent Rage For Order/ Empire tour. One more question about Sweet Oblivion. You have sung the song Aria in the new album entirely in Italian. This a really a great sign of respect to your bandmates and your Italian fans. How did you decide it and was it hard to do it?

-Italy is a place I do spend a lot of time in. Two of the guitar players I work regularly and tour with are Italian. I have also recorded in Italy and my wife and I have this side project business with backstage travel passes where we take people around the world on tour with us. I show them the sights of different cities we visit and know and Italy is one of the countries we go to quite often and is a favorite with me. I thought now was the time to do something like that – with an Italian producer, an Italian record company – why not record the song in Italian? I told Aldo about it and he said “Look, if I can understand what you’re saying, then we can put it on the album” (laughs) and thought that is a good challenge. I got the two thumbs up, you know.

It sounds great actually and we can all encourage you to try that again in other languages too, haha. Geoff, I have read some of your recent interviews where you mention you also work on another project, which you said would be the best sounding album with new technologies. Can you share more about that project? When can we expect it?

-I don’t really know when it will come out, because I am in the midst of working on it right now. But yeah, I’m focusing more on the sound of the new album and on the audio side of it. I want to maximize it, to have a full-spectrum audio presentation. It is more extreme in a way, but it is difficult to describe until you actually hear it. So I think we have to wait and see if I can accomplish what I am hearing in my head.

It’s been nine years since your split with Queensrÿche. During these hard times, all of us have been able to think over all kinds of important things in life. In that respect, have you ever thought about the possibility of being the first one to reach out to Michael Wilton and bury the hatchet?

-No, there’s not really a hatchet to bury, haha. Queensrÿche made some really great music in our time and some really interesting albums. Thirty years is a long time to spend working with the same people. I don’t regret the music that we made, I love it, but I’m really not interested in working with them again. It doesn’t make sense to me. I am very happy and successful doing what I am doing now. I wish them the best but I’ve got no reason to do it.

I totally respect and understand what you are saying and I’ve been following your point of view in the last few years. Anyway, I have to ask this question from a fan’s perspective and it could sound like a shot in the dark, but have you ever seriously considered to talk to Chris DeGarmo and Scott Rockenfield about recording some music together?

-No, I haven’t and I’m really not interested in that. I don’t think they are either, otherwise they would’ve asked me, haha! It’s kind of the end of the road for us, I think.

Last question, Geoff. In his autobiography, Bruce Dickinson writes, that a meeting between him and you “sealed the fate” of the Three Tremors project and that him and you “didn’t see eye to eye about almost everything”. I’ve been waiting for the chance to ask about your point of view on why this project wasn’t realized?

-(Laughing) Gosh, I don’t know. I guess it was more or less down to scheduling, getting all of us in the same room. So doing this project together seemed like a problem because of that, first. Secondly, I don’t think we ever talked seriously about what the thing could be, because it was all just a dinner conversation at the time. We all had an Italian dinner somewhere on tour, drinking heavily and someone, I think it was Rod Smallwood, thought the idea of the Three Tremors project of me, Rob and Bruce singing together would be great, while we were actually listening to the Three Tenors being played in the restaurant while we were having dinner. I don’t think it was ever really a serious project.

Thank you for this interview, Geoff and congratulations for the great new Sweet Oblivion album. I also have the mission to send you some love from all of your fans here in Bulgaria, where I am calling from.

-I for sure am looking forward to touring again and can’t wait to come to Europe and especially Bulgaria. I’ve had some wonderful experiences there and great shows over the years. Thanks again to all my fans for listening to the music for all these years and I really hope to be there soon. Thank you so much for the interview, I really enjoyed it and hope to be able to talk to you soon in the not too distant future. Take care! 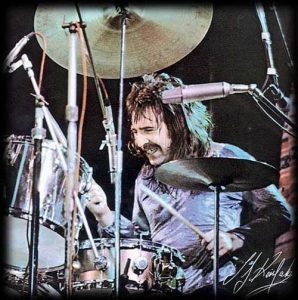