It has been ten years since the Louisiana bluesman’s Live in Chicago album was released, so it could be said that he is about due for another one. In the event though, the COVID-19 crisis has knocked Kenny Wayne Shepherd’s gigging schedule on the head as hard as everyone else’s, so the only way to see him live right now is via recorded concert. Thus we come to the new Straight To You: Live release, available on CD with DVD, Blu-Ray with DVD, double vinyl, and as a digital download.

The audio and video versions are recordings of the same gig, which was filmed at the Leverkusen Jazzstage for German TV during the Traveller tour in November last year. The tour was cut short due to the international lockdown, but fortunately not before this excellent set was recorded for posterity, kicking off with the rocking Woman Like You, which is also the album’s lead single. “The whole intention of this set-list is that we come out with a lot of energy, get the crowd pumped up,” says Shepherd. “We want to get them energised right off the bat.” Certainly this opening salvo serves the purpose excellently, but second track Mr Soul only appears on the DVD, being left off the CD presumably for reasons of space. In fact this is the only difference in the running order, although the DVD includes some additional short chat sequences and introductions that were also left off the CD.

The audience were keen on third track Long Time Running though, a pop-rocker that gets heavier as it progresses. For these ears, the first real highlight comes next, with the nearly 8-minute I Want You. A slow, thumping, straight blues, with nice interplay between the guitar riff and horn stabs, it also features a neat Hammond solo , followed by sax, then trumpet. The guitar solo comes last of all, and demonstrates that although Shepherd can play pop, rock and soul, his heart belongs to the blues.

Having said that, the soulful Diamonds and Gold from 2017’s Lay It On Down is always a highlight, being perhaps the most tuneful and catchy song in the set with its earworm chorus. Shepherd sings this one himself, with lead vocalist Noah Hunt playing rhythm acoustic guitar and singing harmonies. It’s not just to indulge his ego though; Shepherd is an excellent singer and could easily carry the gig himself – check out the video at the foot of this page – so it’s a matter of choice to concentrate on the guitar and hire a dedicated front man. Shepherd sings the next number too, a rocking mid-tempo version of the classic Elmore James rocker Talk To Me Baby, with answerback vocals. It’s a straight-ahead 12-bar with shredding guitar. The cool sax and rasping, sleazy trumpet solo could have been lifted directly out of The Blues Brothers.

Shepherd talks over the slow chord intro to Heat Of The Sun, which is all edited out for the CD, which jumps straight to the song proper. Hunt takes over again on vocals, and the bluesy vibe drifts from introductory ballad, to tasteful mid-section, to jazz towards the end. An epic solo stretches the whole song to 11 minutes, which is a treat, as it’s definitely another album highlight.

I definitely thought that Shepherd was starting to leaving the blues behind with the Lay It On Down album, tending instead towards pop-rock and soul. But the majority of this live set is in or around blues territory – Down For Love is an up-tempo pub blues number, followed by Shame, Shame, Shame, a traditional slow 12-bar, with a proper, decent piano turn. Another epic guitar solo draws massive applause.

Turn To Stone and Blue On Black revert more into melodic pop-rock territory, although it’s back to the blues for the Slim Harpo classic I’m A King Bee, a song probably best known from the version by the Rolling Stones. It’s a non-standard rendition though, with a slow-burning first verse giving way to a hard-rocking juggernaut that turns out to be yet another album highlight.

In true pub style, the band elects to turn to another classic cover to finish off, Shepherd’s celebrated 12-minute rendition of Hendrix’ Voodoo Child (spelled properly, with a ‘d’ on the end.) There is a bit of an audience clap-along, building to a massive crash ending that lasts nearly a minute and a half.

Shepherd’s playing throughout shows a definite influence of his hero Stevie Ray Vaughan, but black-hatted and jacketed as he is in the video, there is a surprising visual similarity too. It’s a generous package at an hour and a half all-in, with the 7-piece band playing it cool and classy, while still keeping up an adrenalin-fuelled energy. Shepherd plays in the blues guitar premier division, make no mistake. 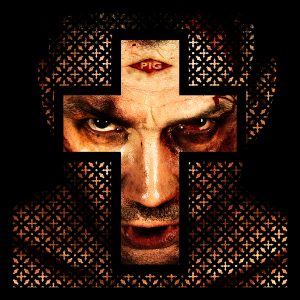