June 4th 2021 saw the international release of the sixth full-length album of Russian ethno-ambient act Liholesie – Shamanic Twilight. Liholesie is a sophisticated Russian ethno-ambient act, whose first demo was released back in 2002 – or alternatively, they’re just about the wackiest musical set-up I have ever heard of! Despite this, I do find myself strangely drawn to this album!

A bit of context perhaps: From 2004 to 2008, four albums were released under the tag of Liholesie, the personnel involved having split from a number of metal bands. Liholesie are/is described on BandCamp as “an old Russian ethno-ambient act, with the first demo released in 2002. And now it is high time for a new chapter in the project’s history with the new album Shamanic Twilight. That’s the music of dark woods, forgotten tribal rituals and spiritual quests, somewhere in between Nordic folk, darkwave and ritual ambient”

And that’s the thing – the music is described as undergoing changes from epic folk ambience to more ritual atmosphere, without any further clues as to whether Liholeslie is indeed a band, with named individuals; or a project, with various people involved more loosely. Actually, it turns out that Liholesie is a one-man band from Siberia, the band’s name Liholesie being the Russian translation of Tolkien’s Mirkwood (Myrkvidr) that he took from Norse mythology. Our man (no name available) says he likes how it sounds and its connotations – twilight, dark forest, that divides the human world from the magical world.

There are nine tracks on this album, all fairly “out there”, with tribal rhythms, “The Darkwoods” and interesting instruments abounding. The opener From Roots To Branches features a sound not unlike a psychotic hyena, but “the Project” manages to blend it effortlessly into the warp and weft of this hypnotic number…along with a jew’s harp and Andean pipes!! But you know what? – it works! The artist/band/Project share an innate sense of tribal rhythm and percussion that ensnares otherwise odd and unusual sounds and instruments, and also ensnares the listener! I guess by definition this first song is about the growth of a seed into a majestic tree ( the World Tree).

It’s followed by Thousands Of Pathways, which lives up to its name, it’s about the journey through the world’s trails and the unknown of the end destination. The middle section again majors on Andean pipes, and they’re effective in floating above some fine acoustic guitar-like work (you can never be too sure about the instruments here!) Flame In The Backwoods is darker, the tension palpable, conjuring some sort of pagan ritual deep in the woods. Mesmerising, scarey, absorbing.

Sorrow Of The Depths is another track loaded with mysticism, a strong sense of mist, cold tension. ALL these tracks exude the same feel for Nature in the Raw, and the naturalistic rituals that so easily might be inspired by that, whether Northern or Southern hemisphere. Visions Quest is quite chirpy in comparison but the title song Shamanic Twilight feels like the central mood, the core ritual, creating a sense of ancient magick. Background beasts in the Darkness was my take on it, and it’s suitably followed by The Night After The Ritual, slower and more organic, it’s a sort of sequel that brings the hyena back in!

Deep Of Predawn Skies is another track where the title gives a clue and sets the tone – fresher and lighter, waiting for the day to begin, with I think some lovely sax in the middle section. Either way, the soundscape is magically clear and inviting. And so tho the album’s closer Gray Wings. The longest track on the album, we’re again caught up in a mesmeric composition of sound / noise. It’s perhaps a eulogy, a sending off, back to That Journey, maybe to the Underworld?

All these tracks are powerful musical incantations, capturing the ambience of the Darkwood. Some are spooky, some are lighter, but they’re all hypnotic, mesmerising, I am lost in a sort of Celtic, “Green Man” forest of pagan Albion, but you can picture yourself anywhere with this wonderful, unique, package of sound! 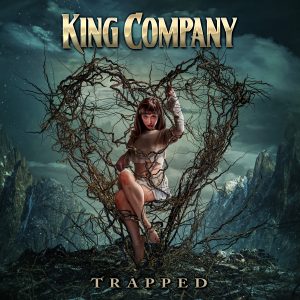