We Are The Night is the third album by Magnus Karlsson’s Free Fall, the project put together by the highly respected and very hard working Swedish multi instrumentalist and song writer. A quick glance of his discography is very revealing as he has a wealth of credits to his name and has worked with some truly exceptional bands like Primal Fear, The Ferrymen, Last Tribe and Starbreaker to name just a few. His style seems to have developed from a love of the British and American rock giants of years past, and he has morphed these influences into his own brand of symphonic/melodic/progressive metal. His solo work sees him playing the majority of the instruments but he has always delighted in bring in a host of vocal talent, despite having a great voice himself, and this has been evident on the self-titled debut in 2013, Kingdom Of Rock in 2015 and now with We Are The Night. The debut saw him working with Russell Allen, Ralf Scheepers, Tony Harnell, Rick Altzi, David Readman, Mark Boals, Rickard Bengtsson, Herman Saming and Mark Andersson and the talent pool was further exploited on the second release with Jorn Lande, Jakob Samuel Joe Lynn Turner, Tony Martin, David Readman, Rick Altzi, Tony Harnell, Harry Hess and Rebecca De La Motte. If you can harness that sort of talent then you are well connected indeed.

As with the earlier albums Karlsson plays all guitars, bass and keyboards and also manages the time to add vocals too. Drumming duties are entrusted to Allen/Olzon and Starbreaker drummer Anders Köllerfors taking over from his two previous partners in Daniel Flores and Jaime Salazar respectively. Karlsson is an incredibly talented musician and his guitar playing is exquisite, with sublime runs and lead breaks, and his keyboard work keeps everything melodic and lush. For We Are The Night he has assembled another stellar listing with Dino Jelusick (Dirty Shirley, Animal Drive), Renan Zonta (Electric Mob), Noora Louhimo (Battle Beast), Mike Andersson (Cloudscape), Ronnie Romero (Rainbow) and Tony Martin (ex-Black Sabbath) – certainly there is enough talent there to whet your appetite. As with the earlier records, the different vocal styles all work well and blend smoothly into one cohesive whole with each track leading seamlessly into the next, and there is not a hint that the music is disjointed – which can sometimes happen when the singing duties are spread among so many voices. The songs are impressive ranging through quality stadium rock ballads to thundering power metal anthems with superb melodies, and the vocal arrangements are simply perfect. This latest impressive work from Karlsson would be worthy for his stunning guitar work alone, but add in such special vocal performances as are on display here and then you have a symphonic metal album that is a constant delight. Most highly recommended, and leaves you wanting more.

Hold Your Fire (Dino Jelusick),
Kingdom Falls (Renan Zonta),
We Are The Night (Magnus Karlsson),
Queen Of Fire (Noora  Louhimo),
Dreams And Scars (Renan Zonta),
All The Way To The Stars (Mike Andersson),
One By One (Ronnie Romero),
Under The Black Star (Dino Jelusick),
Temples And Towers (Tony Martin),
Don’t Walk Away (Magnus Karlsson),
On My Way Back To Earth (Instrumental),
Far From Over (Tony Martin). 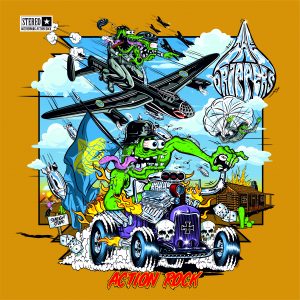