King Of The Badlands is the debut album by the Romanian hard rock band Manic Sinners which was formed by Ovidiu Anton, Adrian Igrisan and Toni Dijmarescu, three respected musicians on the Romanian rock circuit. Ovidiu Anton is the vocalist and he already has something of a reputation in his homeland having won the 2016 Eurovision Song Contest national selection as a solo artist and it is quite bizarre that whist Eurovision is regarded as a complete joke in this country it is virtually worshipped on the continent where it is taken so seriously and is almost an issue of national honour whereas here it is considered the death of a thousand cuts by any serious musician!

Anton has a really strong and powerful voice which is accent free and he truly does have a sound of Tom Jones in his youth about him. This is not meant as any form of criticism as he Welsh wonder always was a powerful singer and a baritone of serious regard. Anton also performs with his own band simply entitled Anton and is regarded as a highly successful solo artist. Toni Dijmarescu plays electric, acoustic and bass guitar and is a real diva when it comes to crunching riffs and searing solos with Adrian Igrisan on drums, keyboards, backing vocals plus additional guitar and bass. Igrisan also is the singer and guitarist in a band called Cargo which is apparently a well loved Romanian band but I have to saw that my knowledge of that country’s rock scene is embarrassingly low. It also seems that he has been knighted by the Romanian President for his cultural services so these guys are most definitely premium artists. As a recording trio I guess they will have to bring in additional musicians when they perform live and I’m sure that this debut will increase their profile and lead to gigs across the continent.

King Of The Badlands is a heavy but melodic rock album full of soaring and hard hitting songs with great lead vocals, some wonderful vocal harmonies and searing guitar which helps to make it a most assured debut from a talented team of musicians. They are first Romanian band on Frontiers and the high profile label should help the band raise its profile exponentially. They album is self produced with mixing duties being done by the hard working Alessandro Del Vecchio and he has managed to sprinkle some of his magic into the sound so I’m sure this is going to be a well received rock album. In truth, it doesn’t matter where you come from as long as you have talent and these guys most definitely have it as is shown in great detail on this most mature and melodic debut.

If you are into acts like Master Plan, leverage and Creye then these are ideal for you but I do get the impression that this band is that skillful that they could play just about any style that they wanted.

King Of The Badlands 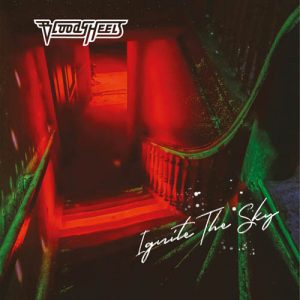