Not everyone here is going to be familiar with Connor Bracken and the Mother Leeds Band I’ll wager, but they are a notable group of youthful rockers out of New Jersey, with a definite penchant for New Wave, punky sounds. Bracken writes all the songs and fronts the band, backed by the capable trio of guitarist Jeff Linden, bassist Chris Dubrow and Rich Seyffart on drums. First thing to notice is Bracken’s distinctive voice; powerful and emotive, but with an atonal quality reminiscent of familiar Britpop singers such as Pulp’s Jarvis Cocker, Brett Anderson of Suede, or Tim Booth of James, it’s certainly not standard fare.

Nightbird Motel is the band’s second studio outing, following 2016’s The Light In The Day, although they also released a live album, Wonderful Year, in 2019.

Possibly the main highlight of this set is the opener, When The World Stops Turning, a riff-driven New Wave hard rocker with an angry vibe. Second track Read On You brings the aforementioned James strongly to mind, as it swings along with to exactly the same rhythm as their hit single Sit Down, although somewhat heavier on the guitars.

Third song Darkness brings a little more subtelty into the mix, with its rapid rim-shot opening rhythm, while Photographs Of Johnny Cash is almost pure ‘60s American punk, with an air of The Munsters in its clear, incisive guitar tone.

A slight country flavour greets us with the next track, Blame On Me, with its ominous, fade-in opening chord, mandolin-styled intro and outro and a proper bit of classic hard rock in the middle – imagine Steve Earle’s Copperhead Road dragged through a pond of Voodoo Chile and you won’t be too far off.

Liquorstore is a good-time party anthem, perhaps the most fun on the album although perhaps a little too long for the repetitive chorus, but it is followed by another highlight, the thumping rocker Voice On The Radio, arguably the heaviest number in the set, based on Bracken’s varied experiences as a late-night radio talk show host.

Back into Power Ballad territory for Nightbird, which incorporates a pretty heavy nod to Dire Straits in the Knopfleresque, semi-spoken vocal line and ambient guitar outro. Dream Of You And Me, the album’s lead single, follows, with its melodic hook and up-tempo vibe.

The 46-minute set is rounded off nicely by a 2½ minute instrumental, simply titled Reprise, which is an acoustic guitar-and-mandolin-soaked retread of Read On You.

If you are wondering about the strange band name, wonder no more – Mother Leeds is an 18th-century folklore character from New Jersey whose 13th child transformed into a devilish monster and haunts the woods thereabouts to this day – hence their toothy logo! 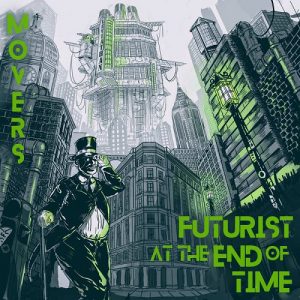