There is a very accomplished level of craft and skill going towards making this album into the acoustic musical tapestry which it is.

Odin Dragonfly is, as any Mostly Autumn fans will know, something of a satellite project to the Mostly Mothership, being a duo consisting of former and current alumni Heather Findlay and Angela Gordon, performing stripped-down acoustic material featuring Heather’s acoustic guitar and Angela’s keyboards and flute. Both contribute vocals, but Heather essentially takes the role of lead vocalist, as one would expect given her previous role as long-term, and still much-loved, lead singer with the Mostlies themselves. This makes for a perfectly balanced dynamic, with Heather contributing one instrument and lead vocals and Angela two instruments (with the occasional exception of some subtle percussion which is provided by Heather), with the vocal harmonies from both being a constant undercurrent. Both share the songwriting duties also, with Angela composing five of the twelve tracks, Heather four, and the remaining three being co-compositions which close the album. This gives the record a beautifully synchronous feel, as neither of the duo overshadows the other in any way.

This, of course, isn’t the first the world has heard from Odin Dragonfly, though it is fair to say that many would never have expected this release to materialise, given that it is over fourteen years since their first and only album, Offerings, was released. While that album was widely assumed to be the duo’s only – ahem – offering, it has been fondly regarded over the last decade and a half, with talk of a return to Dragonfly work regularly speculated on, and so this unexpected bonus to emerge from the scarred musical landscape of the past two pandemic-affected years represents a true example of lemonade being made from life’s lemons. How does the album match up to these expectations, however? Happily, the answer to that question is ‘very well indeed’.

While the last album partly utilised cover material (some Mostly Autumn stuff and a version of Jethro Tull’s The Witch’s Promise) along with the original songs, Sirens is entirely composed of freshly-minted songs, and there is very little evidence of any filler among its twelve strong compositions. One of the pitfalls to avoid with any acoustic recording such as this, of course, is ensuring that a sense of ‘sameyness’ doesn’t creep in, as there have been many examples over the years of acoustic albums, be they from a solo singer-songwriter or a small collective, starting extremely strongly, only for ‘acoustic fatigue’ to creep in mid-way through owing to a lack of the variety which is hard to keep generating with the reduced musical palette to utilise. The key to the success here in side-stepping this trap is the perfectly judged track sequencing, which sees the pair largely alternating their compositions until the co-writes come along to take us to the close. This means that the guitar-driven songs from Heather and the more piano-based Angela compositions (often with added flute) give a constant light and shade, engaging the listener’s attention and interest for the whole ride.

To me, there are two notable highlights of the album. The first of these is Heather’s lead vocals, which are beautifully nuanced, and some of her best work since leaving the Mostly Autumn role over a decade ago. Every song is brought skilfully to life by means of her soulful, emotive yet restrained style – you will find no Whitney Houston or Annie Lennox-style oversinging or showboating here, and there is never any hint of using vocal range or exaggerated vibrato merely for gymnastic effect. Rather, the vocals serve the song rather than the other way around throughout, and it is a performance full of merit. The second highlight to these ears comes whenever Angela’s flute makes an appearance – which is often enough to be a major feature of the album, yet not so ubiquitous as to be blunted by overuse. In a world where the flute is still under-utilised in the prog-folk-rock scene (despite the efforts of Messrs Anderson and Van Leer among a select few others), this is a textbook example of using the instrument to bring just the right amount of colour, and the occasional deliciously Celtic edge to proceedings.

This factor emphasises a key strength of the album; despite the relatively small instrumental selection, the way the constituent parts here are fitted together for maximum effect is a triumph of arrangement, whether it be the vocal harmonies so subtly and skilfully used, or the occasional perfect amalgamation of the guitar and piano parts. There is a very accomplished level of craft and skill going towards making this album into the acoustic musical tapestry which it is. Make no mistake, this is not a mere ‘acoustic side project’ stitched together in some down-time – this is clearly material which is important, and often personal, to its creators – and the respect it is afforded pays dividends for the listener.

Standout tracks, you ask? Well, an obvious highlight here is the seven-minute Gulls, being not only the longest piece here, but also a spellbinding slow-burner of a track which burrows its way into your consciousness on repeated listening (yes, I know gulls aren’t known for burrowing, but you will forgive the mixing of metaphors I hope!). The other two co-compositions also excel, with the triumphant and stirring Rise And Fall being a particularly effective arrangement, and the closing Diamond Soul a perfect closing track. Heather’s cathartic-sounding Beneath Your Armour is a very powerful yet understated piece of songcraft, while Angela’s marvellously evocative Circling Ravens and the similarly flute-driven Don’t Wait Too Long illustrate just what an underrated songsmith she in fact is – indeed, the latter song features perhaps the most effective flute playing on the whole record, seamlessly integrating into the song.

The name Odin Dragonfly, of course, is rather a clever one. As well as being an excellent name in its own right, with a similar contradictory ‘oxymoron’ effect as Iron Butterfly for example, it is also an anagram of the words Findlay and Gordon, which makes it extremely pleasing to the linguistically OCD among us! It should also be noted that the booklet design with this album (fitting into the satisfying trifold digipak) is a beautiful work, with the lyrics accompanied by perfectly accompanying imagery. It’s been a long time since the Dragonfly’s maiden flight, but anyone who has been waiting patiently for it to take to the air again will not be disappointed. This is a quietly unassuming gem of an album, and should be applauded as such. Nice. 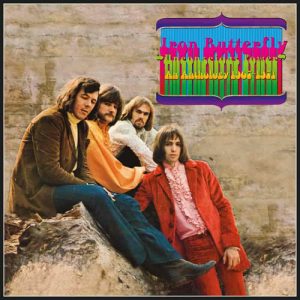