Son Of Man, led by George Jones (son of man legend Mickey) recently released the album State of Dystopia (see review posted 27 Feb 2020). Following the release of the album, I have the opportunity to sit down with George for Velvet Thunder, and discuss the latest news about the band and also the strange times we are currently in! I begin by commiserating with George that not only are gigs being cancelled everywhere, but also the PR events associated with new material being launched. Social Distancing places more onus on all of us linked to the music industry to communicate electronically. George responds thus: “It’s certainly a very confusing time for everyone and cancelling events is a real shame but it is the right thing to do. We are entering a massive period of uncertainty now and it’s important to us all be with our loved ones. So, online communication is going to be huge! I can’t even begin to tell you! Yes, between the MAN / Sassafras legacy there is a lot of history but I have to say that the ‘heritage question’ is not a factor, not any more. We will always be thankful and pay tribute and respect to the past but this record is a progression. We think so anyway.”

I suggest that the first Son of Man album sounded like the band all had a lot of fun writing and producing it. Three years on, did they have a more-than-usual sense of the “difficult second album” to get over? George makes the point “I’m glad it came across like that. We most certainly did and it was an exciting time. We had spent a good 5 or 6 years playing live and had gelled as a unit in that time. The second album was recorded over a longer time period but the songs came a lot quicker. Pre-production was a large factor. We knew exactly what we were doing when we hit the studio but we also left some space for experimentation.”

Given that the first album was ‘instantly wow, that’s so good, so fresh’, I venture to suggest that the new album was different; it perhaps didn’t hit me between the eyes in the same way but that it was really, really growing on me and is now just as good as the first. Did that imply that the band’s collective song-writing style has changed? George replies “Well, that’s even better! I prefer an album that’s a “grower”; it holds your attention; it doesn’t feel disposable. The songwriting credits on this album were slightly different. We all had our input but some new influences shaped the way the record sounded and we also experimented with a more electronic sound, for example, the addition of sequencers.”

The 2016 debut album had a very fresh contemporary style for song arrangements whilst still being faithful to the Manband’s 70’s style – and the band has continued this link with the opening track Conscience being an adaptation of an early Man demo. I ask George how this came about: “Conscience was a song I originally heard from a 1970 bootleg. I always loved this piece of music but it sounded very unfinished, although at the same time it had this organic charm that was classic MAN. I had asked Deke (Leonard) about it and he told me that it originated in early 1969 but was left off the album 2ozs of Plastic…. Deke gave me his blessing for us to finish it and so the songwriting credits are shared between the 1969 line up, Glenn and myself. It became a new song and I was so happy to play it to Deke’s widow, Mary.”

I move on to say that although the album’s title and some of the lyrics are quite heavy, more than ever before, Richie’s vocals are so smooth! To me he has that same smooth but laconic, world-weary edge as Joe Walsh, and having heard Richie belt ‘em out live, I wondered how on earth does he keep his voice so smooth? “Richie’s performance on this record was really special! He has a way of singing over something quite modern and making it sound fresh rather than some classic rock singer belting over a 3 minute song. A bit like a good guitarist will play for the song, Richie will sing for the song, he’s like the Mike Campbell of Vocalists.”

That’s a lovely tribute from a fellow professional! I go on to comment on how “West Coast” the band can sound, which is not to say they’ve “gone soft”, it just sounds like they’re just making the most of a great, clean-sounding mix – all credit to the band’s producers and “backroom boys” George appreciates this and says “Tim, the engineer on album 1 was co-producer on album 2. Vocals are one of Tim’s specialities. His work with previous artists like Christian Philips, Steve Balsamo and his love of all things Beatles, Beach Boys were very influencing so we tried to cram as much of that in as possible. MAN also used to have a great vocal sound, especially when they worked with Roy Thomas Baker, so maybe we continue that.” I agree, highlighting how the last track, Too Many Questions perfectly captures that mix of old and new, with a meaty tune, heavyweight riffs, lovely harmonies, swirling guitars extending into and fading out with a classic series of Man / Son of Man guitar riffs and licks, and ask whether this was consciously written as that sort of blend? George says “I wrote that song 20 years ago and only finished the lyrics last year. It was one of those songs that just kept getting put to one side. It was always intended as an ode to finding oneself and coming of age. However, as the album progressed, although it wasn’t intended as a concept album, the song took on a new shape and I wrote the words in the time it took to sing them whilst listening to playbacks. Musically, it’s the last track on the album, so we just went for it. I didn’t take a huge amount of solos on this album but on this track I was definitely tipping my hat to Micky!”

I hark back to my earlier thoughts on the spirit of old and new, what’s been and what’s still to come, being so much more important than usual to this band – and then gently enquire whether, for George in particular, that must sometimes be pretty tough – especially when playing his dad’s guitar. I’m guessing this is where the family is so important? George responds “yes, it’s very important and it will always be a huge factor! However, Micky, Deke and Clive would not have wanted me to become part of a heritage act! They were all prolific songwriters and always moving forward. That’s important to us as a band too -and as individuals.”

What a fine answer! It occurs to me whether, following this “sense of family” thread, Son of Man feel part of a wider “Welsh-rock” family – that must be valuable both emotionally and creatively, and whether they all get up to some mega-jamming sessions, whether there is a “circuit” of local studios they all gather around! George agrees, and feels Son of Man have now fallen into a new wave category of Welsh bands “Its amazing, there is a whole new generation of local acts! We all try to get together as much as possible and regularly share bills together. Next on the list is the Patti Pavilion, on June 6th with Buffalo Summer and Buck and Evans.”

Having seen the guys live, I can’t resist asking a question about ‘the generational thing’, in that some of the band are ‘slightly younger’ than the others. I’m intrigued by how that influences the dynamics of the band, and – how can I put it – whether one or two band members might get tired earlier than the others?!! George giggles “To be honest, we are all trying to keep up with Richie! (laughs)…and they would say (I may have shared this question with one of the grey hairs (laughs)), just because there’s snow on the mantelpiece, doesn’t mean there’s no fire in the grate! They have a lifetime’s dedication to rock n roll behind them and an abundance of presence and charisma at their disposal. It must be remembered that rock music is multi-generational and that class musicians are class musicians regardless!” (good answer, George, very politic!)

Lastly, we return to the ongoing impact of the Coronavirus. Son of Man have had to cancel a number of live shows. George is hoping they will be doing a decent-sized tour in the autumn (or thereabouts) – in effect as a sort of delayed promotion for the new album. They’re working on that right now, and in the meantime George sends his best wishes out to us all as the wider Rock family – let’s hope we all get to see each other on the other side. Cheers George, it was a pleasure to chat! 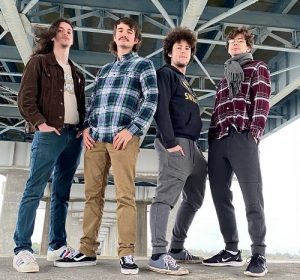 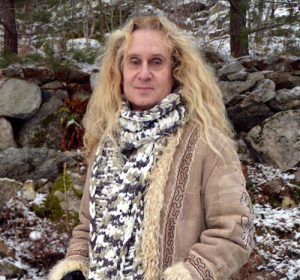 NAD SYLVAN – ‘Interview With The Vampirate’ 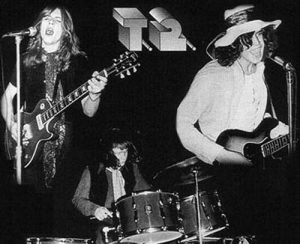 T2 – Will things finally work out in Boomland?