Souls Of Diotima is yet another in an ever growing list of female fronted symphonic rock bands although they have been around since 2004 with Janas being the bands fourth album to date. The name is new to me and it seems that this album is the second part of a concept that began with The Sorceress Reveals – Atlantis and is all about the old stories and legends of Sardinia, many of which border on the macabre but isn’t that the way with tales of myth and legend? As with many islands, many of the legends concern the sea and seafaring and it is plain to see that this band is very proud of its Sardinian roots.

Originally formed by Giorgio Pinna, it appears that there have been a number of changes in the band recently and they now line-up with Claudia Barsi on lead vocals, Giorgio Pinna on drums, Antonio Doro on bass and scream vocals with Fabio ‘The Black Mask’ Puddu on guitars. It is the voice of Claudia Barsi that hits you immediately as she packs the punch of a battleship and has a very slight and delightful Italian accent to her vocals which are all sung in English and I rather suspect that the addition of a couple of songs in their native tongue would be devastating. For sure, when Barsi sings you sit up and take notice as this is a woman who does not take prisoners and when she has finished with them then all of the songs know that they have been well and truly sung! The band, obviously, trades in the same arena as the like of Sirenia, Epica, Within Temptation etc but all have their own subtle differences that make them all unique and simply wonderful.

There is a style and finesse to female drive symphonic rock which is a genre that lends itself supremely well to the soaring female voice be it soprano, mezzo-soprano or contralto and all of the diverse, wonderful singers have the power and beauty to drive the music into new and rewarding directions. There are the odd dark vocals and growls on Janus too but these fit the style perfectly well with Barsi being imperious and the guitar work of Fabio Puddu is just awesome, no other word for it. The album is symphonic, power and progressive metal fused into a glorious and atmospheric delight that shows Souls Of Diotima should be considered of equal stature to the other giants of symphonic metal and there is so much here to revel in and enjoy.

Wonderful and melodic songs played to perfection from a team of musicians who are totally together and, most importantly, still have that dream and desire to push their music onwards and upwards. 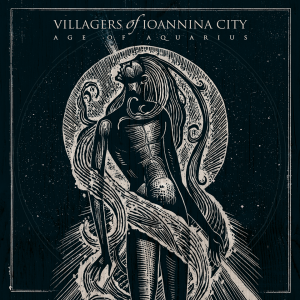 Villagers of Ioannina City – The Age of Aquarius (Napalm Records)