Everyone with an interest knows the Steve Hillage story by now. After a few years following his departure from Gong when he effectively had the mantle of ‘aging hippie saviour’ thrust upon him, he abruptly walked away from a style of music which he was quietly revolutionising, and disappeared into the world of trance music with his System 7 project. The word ‘disappeared’ is used deliberately here since, as excellent as much of that System 7 output was, he fell off a lot of people’s musical worldview and almost became the prog rock world’s own Cat Stevens, if you will.

Apart from the occasional Gong reunion appearances, Hillage took his first solo steps into his previous ‘life’ again in 2013 when he collaborated with Japanese band Rovo on the superb Phoenix Rising album and related tour, although even then he stopped short of playing any of his own back catalogue material, and played a supporting set of System 7 material as well. This time he has jettisoned the training wheels entirely and thrown himself wholeheartedly into a set composed entirely of material from the 1970s, with the latest selection coming from 1979’s Open, in an absolute early Christmas present of a setlist.

Torabi is a genial and engaging performer, radiating joy and energy, and appears to be the very embodiment of the soul of Gong

First, however, the show is opened by the current incarnation of Gong. I say ‘opened’, but they manage to close it too, as they double up as Hillage’s band as well, performing for an exhausting three hours plus every night of the tour (take that, Springsteen!). The band are currently fronted by Knifeworld leader Kavus Torabi, having been specifically nominated to fulfil the role by Daevid Allen before his death, and in truth it is an inspired piece of ‘casting’, as one might say. Torabi is a genial and engaging performer, radiating joy and energy, and appears to be the very embodiment of the soul of Gong, albeit in a slightly younger man’s body. The Gong set is certainly not one for the uninitiated, opening as it does with the entire 20-minute epic Forever Reoccurring from latest album The Universe Also Collapses, which would surely lead neophytes to wonder whether the entire set would be one continuous piece of music. Following this, however, we are thrown back to 1971 with perhaps the highlight of the set, a remarkable You Can’t Kill Me from the Camembert Electrique album. That track proves the sole trip back to vintage Gong material, as the remainder comes from the latest two albums, since the demise of Allen, finishing with a tremendous Insert Yr Own Prophecy. Normally there would be a section developed around the Master Builder track from the album You, but that is omitted for reasons which become clear later. The crowd reaction at the end is huge, and the band seem absolutely delighted – even if a mid-set attempt to levitate the venue ended in failure!

A short break, and the surely fatigued Gong men take the stage again – this time along with Steve Hillage himself and a very vibrant-looking Miquette Giraudy. The two hours which follow consist of a song selection which cannot fail to send fans of a certain vintage and persuasion into Hippie Hillage Hog Heaven, with his joyous interpretation of George Harrison’s It’s All Too Much – complete with the old Golden Vibe coda – coming up as the second song in. The big hitters are present, of course, such as Salmon Song, Solar Musick Suite, Motivation and the set-closing Hurdy Gurdy Man, but further delight can be gleaned from some of the deeper album cuts included. The Dervish Riff is hammered out in magnificently thunderous fashion, and the opener from the Green album, Sea Nature, is greeted as an old friend, while the instrumental Palm Trees (Love Guitar) from that same album is simply beautiful, with Hillage sprinkling liquidly languid guitar magic at will. Hurdy Gurdy Man sees the spirit of composer Donovan manifested and sent lurching over the fields in search of blood, as the trippy-psych original is extended from Hillage’s initial reworking, dragged around the block and given a brutal assault, while somehow managing to emerge a stronger and more impressive beast than it has ever been. The only surprising omission is Electrick Gypsies, but no-one could justifiably complain.

This has all been magnificent stuff, but the encore will not only take things to a new level but build a new storey on top of that. After a rollicking Light In The Sky, a meandering glissando guitar interlude leads us into The Glorious Om Riff, Hillage’s reworking of the Gong track Master Builder, and surely the reason it was omitted from Gong’s performance. This riff is, of course, so hypnotically hallucinogenic in its repetitive, circular majesty that it should probably be an offence to drive while listening to it, and yet the piece begins in fairly restrained fashion. After a few minutes wherein they appear to be holding things in third gear, the band stop and momentarily there is a palpable air of ‘is that it?’ from the crowd. The answer is ‘Hell no, that’s not it’ as, after a couple of seconds the band slam back in with such ferocity that we suddenly understand how the fly on a windshield of Genesis fame must have felt. The next five minutes or so are what can only be described as a sensory barrage of astonishing proportions. Audio, as that riff pounds away over and over and over. Visual, as the strobe lights hit you mercilessly. Tactile, even, as you feel the sweat dripping down your face from the oven-like temperatures. Hell, there were moments during this when I probably learned to taste new things! The man himself said that this wouldn’t be what people might expect as the ‘cuddly old Steve Hillage’, and he was right. This is like the love-child of Gong and Slayer. In a good way.

When the band finally hit the last sledgehammer chords, there are a couple of seconds which see the audience genuinely stunned, before they erupt. People turn to each other and simply shake their heads. It’s a performance which can’t be followed, and yet they do! Returning for a second encore, even Hillage himself says ‘it’s hard to follow The Glorious Om Riff really’, and yet they go as close as it is possible to, with a brief Hello Dawn leading into a slice of prime Gong with a thunderous I Never Glid Before from 1973’s Angel’s Egg sends the older Pothead Pixies into delight. It’s a marvellous conclusion, but the question remains whether they really should have come back again. Nevertheless, nobody is complaining about more Hillage at this point, and if he had any lingering doubts about bringing this material out of the mothballs again, those doubts are loudly and enthusiastically dispersed.

A set full of ‘70s material it may have been, but this doesn’t have the feel of a nostalgia show at all. This is not old hippie music. This is timeless, ageless hippie music. And thank God, and Mr Hillage, that we still have it. Tonight was worth waiting forty years for and then some. Hopefully we will see this show roll around again, and soon. 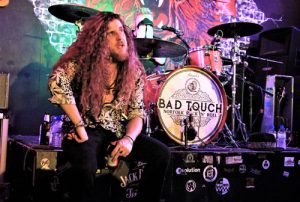