When I was a kid in the late ‘60s and early ‘70s, one of the upsides of catching some flu bug was getting to bunk off school, and another was special radio privileges. In order to while away the tedious hours confined to bed with a temperature, I would get to be custodian of the wireless radio. My childhood memories are therefore punctuated with short periods of concentrated Radio 1 listening. One of these events evidently occurred in late 1972, because I clearly remember a band (or ‘pop group’ as we called them then) called The Sweet being in the charts with a song named Wig Wam Bam.

The Sweet would develop into glam pop stars, and eventually evolve into a full-on rock band, with huge hits such as Blockbuster and Ballroom Blitz putting them in the forefront of the glam rock genre along with Slade, T.Rex (and yes, Gary Glitter).

Guitarist Andy Scott is the only remaining member of the classic lineup, and has now led the revamped Sweet (without the ‘The’) past his 70th birthday. It might be assumed that the audience would be composed of ageing glamsters, but in fact we old ’uns were rubbing shoulders with kids in a packed Islington Assembly Hall for a rocking good evening with a huge dollop of nostalgia thrown in.

The youthful Novatines are the support band on this tour, with their brand of high-octane up-tempo rock reminiscent of Green Day, Placebo and other purveyors of American New Wave pop-rock. Their good-natured set hit a purple patch halfway through with new song Never Enough, with its close-harmony vocal section, followed by Come Alive from their recent EP. Their set closed with the epic Silver Screen, concluding an excellent warm-up for the main event – this is a band worth catching in their own right if you get the chance.

Then it was Novatines to Ovaltines as the veterans took the stage, opening with Action, an excellent but safe mid-rocker, followed by the anvil-steady beat of New York Groove. Next up was the first of the big-hitting singalongs, Hellraiser, followed by Burn On The Flame, with its harmony guitar sections and tight stops. It should be mentioned that second guitar and keyboards were being provided by the excellent Steve Mann, who has been playing with the band on-and-off since 1989, swelling the band currently to a 5-piece.

The vintage nature of the set was emphasised by the ‘50s rock’n’roll pastiche of Peppermint Twist, conjuring up Bill Haley and Chuck Berry, an excellent foot-tapping bopper, followed by The Six Teens, written by the ‘70s hit machine of Chinn and Chapman and clearly one of singer Paul Manzi’s favourites. After that, the harder rock started to come through with the guitar answerbacks of AC/DC (the song, not the band).

Andy Scott announces that the song had raised the ire of one Mary Whitehouse back in the day, but it was the next song that was banned by the BBC: Turn It Down, with its mildly expletive-ridden content. Great swathes of the audience obviously know these songs better than I do judging by the singalong passages, but the next one was an eye-opener for me: Set Me Free is pure New Wave of British Heavy Metal and could have come straight from Ian Gillan’s Deep Purple or the Dio incarnation of Rainbow. A stonking, up-tempo metal highlight, in which Andy Scott swaps his red Strat for a gold one which he plays with an (empty) baked bean can for some reason.

The gig is really hitting its stride now, as Manzi incites the crowd to more chanting before they launch into Teenage Rampage, another massive audience favourite. To my surprise though, the biggest singalong of all came with the bubble-gum pop medley of the aforementioned Wig Wam Bam and Little Willy. The whole evening was turning into a veritable greatest hits from the band’s history, so it would perhaps have been wrong to leave them out, banal lyrics notwithstanding, but as it happens this section drew some of the biggest audience participation of the night.

Steve Mann goes back to the keyboards for the trumpet-like overture to Love Is Like Oxygen, constructed like a Europe power-ballad, and while he’s there they stick in a full ELP rock-out version of Aaron Copland’s Fanfare For The Common Man, which was a nice Easter egg served up for the Christmas season.

Andy laments that it’s never a good thing when you lose two members of a four-piece as Sweet did recently, but can congratulate himself on bagging Arena and Cats In Space vocalist Paul Manzi as the new front man this year, and the excellent Lee Small on bass even more recently. Drum stalwart Bruce Bisland has been a constant presence behind the kit for 27 years, and with Steve expanding the band to a 5-piece, the sound is better than ever.

The main set finishes with Fox On The Run, which is great, though a little anti-climactic in view of all that has gone before – there are a couple of massive holes missing in the set though, which have evidently both been left for the encore – the only question is which way round they will be played…

The band come back on stage to the wailing of a police siren, which answers that question, and launch into their huge hit Block Buster, which joins seamlessly to Ballroom Blitz, the biggest crowd-pleaser of all. Andy Scott deputises for the absent Steve Priest on the ‘We just haven’t got a clue what to do’ bit, but if he’d left it out completely, the yelling audience would have been enough to fill the gap admirably.

An absolutely stonking evening was had by all, but which song is left ringing in our ears at the end and all the way home? For me I’m afraid it’s, “Hiawatha didn’t bother too much, about Minnehaha and her tender touch…” 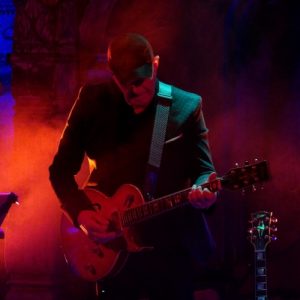 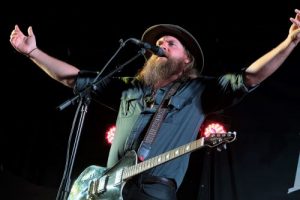 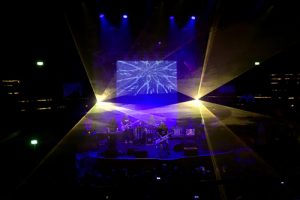