It always amazes just how much music there is out there simply waiting to be discovered and the latest name that we have to add to our ever growing list is Wine Guardian, a most impressive and inventive progressive metal band from Italy. They are a new name to me and it appears that the band was formed in 2008 by vocalists and guitarists Lorenzo Parigi with Stefano Capitani on bass and backing vocals and Davide Sgarbi on drums and backing vocals. It seems that they have a love of all things Queensryche, Savatage and Fates Warning which was apparently very influential on their early material but have now expanded their sound after exposure to the likes of Opeth and Porcupine Tree. Sadly, I have not heard the earlier material so cannot comment on the journey the band has taken but I will most certainly be doing further investigation of the back catalogue which includes the EP Fool’s Paradise in 2014 and album debut Onirica in 2017 with both being self released works. Thankfully, Wine Guardian now has a label which should mean that the new album is much easier to get hold of and, with luck, the record label (as well as band) will be well rewarded for taking a chance on such a well rounded and accomplished act.

Wine Guardian possesses a big, big sound with the guitar very much to the fore with Parigi having something of an Alex Lifeson approach to his playing and his impeccable delivery is at the very core of the bands impressive and all encompassing sound. They delight in complex, rather lengthy and very well written progressive rock songs that take a theme which the band then thoroughly explores to make a delightful brand of prog metal that never overstays its welcome and each new play allows you to find previously unheard facets within the songs. Coupled with this is the clever and intricate musicianship which is of the highest order and this really does demand constant replays which are ever rewarding. The comparisons with Rush are huge yet they are in no way a Rush tribute as it is more a case of them paying homage to the masters whilst developing their own unique sound.

Timescape is one of those remarkable albums that appeals immediately yet delivers so much more with each additional play and will surely become a treasured work of magnificence by those fortunate enough to hear it because I guarantee that if you hear it then you will want it. I would even go further and state that no real progressive metal collection will ever be complete without a copy of Timescape, it is that essential. The level of musicianship is outstanding with Capitani and Sgarbi backing the mellifluous guitar of Parigi so perfectly and he is a man with so many styles of guitar playing that you simply have to sit back and admire his skill. Added to this are his perfect vocals as he has a huge range with immense power and all are delivered in perfect English that is totally accent free. Indeed, all three musician’s voices work so well together and the vocal harmonies on the album are magnificent throughout.

You are highly recommended to check out this mighty fine album as the band has taken progressive metal and infused it with typical Italian flair to make a perfect album that offers so much and truly is an essential purchase. 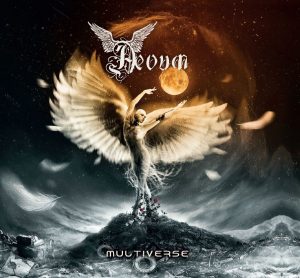