Following the release of her critically-lauded Top 40 album The Art of Losing, Welsh producer and multi-instrumentalist The Anchoress (aka Catherine Anne Davies) has shared a remix of the BBC 6 Music playlisted single ‘Show Your Face’ by Bradford-based post-rock electronica musician and producer worriedaboutsatan.

worriedaboutsatan (aka Gavin Miller) is widely regarded for his work music-supervising the soundtracks to Adam Curtis’ acclaimed BBC documentaries, as well as sharing a stage with everyone from Underworld to Olafur Arnalds. Making work that fuses post-rock and electronica influences, previous remixes include HEALTH, Gold Panda, and Clock Opera.

Gavin says:‘I always like remixing Catherine’s stuff, as everything always sounds so good! This one started as a solo remix, which is why I put loads of guitar on it. I switched it to a satan one once I’d heard it back, as I thought it needed a little something more, so I added some synth and that Massive Attack style beat to give it that extra dimension. Turned out pretty well I think.’

While Catherine adds ‘I was thrilled to get my good friend Gavin to reimagine ‘Show Your Face’ from the new album. We have a bit of a history with him previously having remixed several tracks from my debut so it was a given really that he would turn his hand to one of the new tracks this time around. He’s really captured the sinister undertones of the song. I’m a big fan of everything he’s done.’

Hot on the heels of being named one of The Sunday Times‘ “must-hear” Albums of 2021, Catherine has also announced more live shows as well an appearance at this year’s Long Division festival in Wakefield. This year will also see Catherine support Manic Street Preachers on their autumn 2021 tour at 13 shows, followed by her own headline show at Queen Elizabeth Hall in London for May 2022.

The Art of Losing is a sonically ambitious album, helmed by Davies on sole production duties – a move she said felt both natural and necessary after having a “side hussle” in engineering/producing for others. The Art of Losing also features guest appearances from James Dean Bradfield (Manics) as well as legendary drummer Sterling Campbell (David Bowie, Duran Duran).

Singles ‘Show Your Face’ and ‘The Art of Losing’ were both championed and playlisted by BBC 6 Music, with the album also receiving the coveted ‘Album of the Day’ spot, a feature on BBC Radio 4‘s Front Row, and an appearance on Channel 4’s Sunday Brunch.

Order ‘The Art of Losing’ –  www.theanchoress.co.uk

Tickets are available from –  www.theanchoress.co.uk

Listen to the singles from ‘The Art of Losing’.

The Art of Losing – https://youtu.be/guEJhDJoUO8

“The inadvertent and beautiful and truthful soundtrack to this moment.” CAITLIN MORAN

“A brave and inspirational album. What a remarkable artist.” THE SUNDAY TIMES (Album of the Week)

Tag: Kscope, The Anchoress, The Art Of Losing 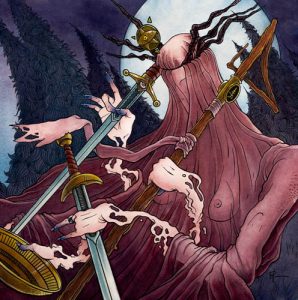