This is veteran progressive rock/pop outfit Kayak’s 19th studio album. The band formed by Ton Scherpenzeel on keyboards and Pim Koopman on drums back in 1972 has consistently produced good light progressive rock music despite never quite reaching the fame of their more quirky and equally long-standing fellow countrymen Focus. If the name Scherpenzeel has a familiar ring about it then that’s probably due to the short stint he had with Camel that resulted in the (very underrated) Stationary Traveller album. But most of the time he has been with Kayak and he’s very much been its leader since Koopman passed away in 2009. There may be a little irony in the title of this new album since Scherpenzeel had a heart attack at the end of 2019 and hence was very close to literally being out of this world. Luckily, he recovered from that. Despite these health problems, it has certainly been a fertile period as the fifteen tracks that constitute this single CD or double vinyl testify.

The musical mould is very much in the Kayak tradition, or should I say ‘traditions’ since they’ve mixed a progressive rock style and a mainstream pop/rock style in most of their albums and at times have added a strong theatrical feel (they wrote several rock operas in the early 2000s). Just listening to the four tracks that make up the first side of the vinyl version captures the mixture of styles perfectly. The title track opens with shimmering prog keyboards and then the lilting main theme enters on guitar before the song develops into a well-constructed melodic prog-rock track. It’s a polite neo-prog piece with no discordant chords or odd time signatures in sight. If you like bands like Arena then this is likely to be your cup of tea. Then we get Waiting, which sees the band go off into an ‘80s pop style which in some parts is slightly irritatingly dated but it is blessed by a chorus line the Brothers Gibb would have been proud to have penned! The theatrical side of the band comes out in Under A Scar which tells the story of the Greek legend of Electra through lots of good vocal moments, some slightly pompous orchestration and a good upbeat middle section. The last track on the first side of the vinyl is Kaja, a relatively short three-minute instrumental which is a showcase for the guitar playing of Marcel Singor. Don’t get me wrong: he doesn’t really let loose here; it’s more like the restrained but emotionally impactful approach of Andy Latimer.

The rest of the album continues in a similar vein. Highlights for prog fans are likely to be the two longer tracks: Critical Mass which has vocal sections that recall early Marillion, and a fine Moog theme; and the ten-minute A Writer’s Tale which has epic keyboard themes as well as something of a Yes-boogie in the middle section. Many other tracks veer towards mainstream pop/rock, some more successfully so than others. My favourite amongst these is the up-beat Cary which sounds like the sort of three-minute ditty that Springsteen churns out before breakfast, but there are also one or two more mundane tracks such as Traitor’s Gate which is a poor imitation of Toto.  It must be said that all the tracks are professionally crafted though. Even a fairly routine ballad like The Way She Said Goodbye is embellished by a gorgeous acoustic guitar solo. The lyrics on these pop-oriented songs are often a little mundane too but then we get a surprising reflection on death in One By One which has the moving opening lines: ‘One by one they leave us, the heroes of our past. For some vague and selfish reason, we expected them to last’. It’s a great vocal performance too by Bart Schwertmann although the song is less maudlin than I may make it sound because it builds up to an almost cheerful climax (before it rather oddly concludes with a little piece of barroom piano!). It might have been a good album closer, even if the song that does actually close the album, Ship Of Theseus, is a dramatic piece and a fitting end to proceedings, not to mention another example of the occasionally deep thinking in the lyrics that the band exhibits (Google the song title and you’ll see what I mean).

Ultimately, this is an album that is more than the sum of its parts. There is no new Stairway To Heaven here but the combination of good writing and quality musicianship spanning diverse musical styles makes this a very enjoyable 70-minute listen. Those who look for good well-performed rock music with a prog twist will love it.

Tag: Kayak, Out Of This World, Ton Scherpenzeel 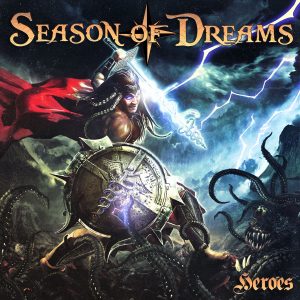