Zeahorse are a four-piece noise rock band from Sydney formed in 2010. For the past decade they have built a strong dynamic and immersive live experience that has earnt them a loyal and underground following across Australia. Living in different states, writing and recording when it suits, their sonic evolution has ignored fleeting fashion’s in favour of a genuine energy to make music with one another and continually refine their craft.

After over four years away from the studio, Zeahorse’s much-anticipated third record ‘Let’s Not (And Say We Did)’ kicks off big-style! The band entertainingly describe themselves as “the sound of gleefully setting alight a skip bin of discarded ‘How to Win Friends and Influence People’ paperbacks!” So they’re a chirpy little gang!

From the everyone’s-mate company narcissist of ‘The Ladder’ to the selfie-aware solipsism of ’20 Nothing’s trendy shut-in, Let’s Not (And Say We Did) is Oz noise rock at its most irreverent! The lyric on single ‘Guilty’, “Tried to go to heaven but went the other way” is particularly pertinent here.

What the band say: “The record is filled with ratbag cynicism, big beats and snarly guitars. Structures are reminiscent of early 90’s punk bands like Unwound and Fugazi but there are also lashes of thick heavy psych which we’re renowned for. In terms of themes and focus points of the album, we’re talking satirical commentary on social behaviour both online and in the real world, the confusion we have with living life in the moment as well as trying to live a life online, struggles and challenges with identity, with what to believe and what to ignore.”

Actually, that’s not a bad summary of their style and ethos – they do at times also remind me of Souxsie Sue, and the Damned, so they are quite “retro-punky” if you’re feeling cynical. However, the wall of sound is nicely varied, never monotonous, evokes shades of Uncle Acid and the Deadbeats at times, so there’s that more contemporary edge as well.

On this, their third album, the sound is heavier, a bit more distorted than before. There’s lots of feedback, a fair splattering of Sludge rock a la Ruff Majik, and even Hawkwind-like hypnotic riffing. More than a touch of post-punk, psych-rock as well. I’m always a sucker for those mesmerically building rhythmic patterns so this album shot past in no time!

The band are never going to re-write the laws of rock’n’roll with something stupendously original, but that’s not the point – they’re having fun, satirising society and belting out the chords – I bet they’re tremendous fun live – enjoy! 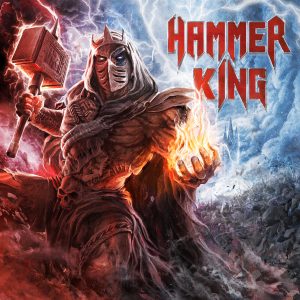