Scottish rock band Anchor Lane released their debut full length album Casino on 31 January. They’re a young band, but they’ve been developing this first album over quite some time, and they’re understandably excited about it, and very happy that people can now hear their recorded material. The band is a classic four-piece, comprising singer Conor Gaffney, guitarist Lawrence O’Brien, bassist Matthew Quigley and drummer Scott Hanlon, all in their early twenties. Don’t be fooled though, their age belies the maturity of their song-writing and the quality of the material here stems from being steeped in the best traditions of heavy rock – for me, the sound of this album is a great blend of contemporary and earlier styles.

To celebrate the launch, Velvet Thunder caught up with the band just before it was released, with them being in the midst of some early gigs prior to further touring planned for the Spring and Summer.

The album benefits from a great production, courtesy of Toby Jepson, who’s also worked with Wayward Sons and Little Angels, so they’re in good company. Toby himself is quick to praise the band’s sense of vision, and intuitive and intelligent song-writing. They’ve also had the benefit of co-writing contributions on two songs (Blood and Irony, and Dead Run) from Ricky Warwick of Black Star Riders and The Almighty, and Ricky believes they already have everything it takes in their toolkit to succeed. As a whole, the album is packed with immense sounding up-tempo tracks that showcase the band as a genuinely interesting new force to be reckoned with.

To kick off, I asked the band what they make of the first reviews of the album that have now appeared. Singer Conor says “the reviews of the album have been overwhelmingly positive which is incredibly encouraging. We have a clear identity of ourselves as a band, but with our debut album we enjoyed pushing the boundaries of what that identity can be – and the reviewers seem to have recognised that, which is great.”

Scott underlines how excited they are about the album finally being out there. I asked what it was like in particular to work with Toby and Ricky, and what the band took from working with them, and Scott continued “Both Toby and Ricky are world-class musicians. They’re very different in their approaches which benefited us all the more. Ricky has this rock ‘n’ roll spiritual connection with the music. He doesn’t look for the reason it works, he knows it works because it feels good to play. Toby as producer was able to take a step back, look at the big picture and analyse what each song is trying to achieve and how to get it there. In pre-production Toby really challenged us and it changed the way we approached the song writing from then on”.

I wondered how, apart from Ricky Warwick’s two co-contributions, the band handles the song-writing, whether all the songs had been written collectively by the band or whether the four each had their own distinctive styles. Warming to his task, Scott says “We write our music collaboratively in a rehearsal room, we trade melody/riff/lyric ideas and sometimes jam things out of no-where. We all have our own influences that we throw into a melting pot to create our own musical identity. Lawrence and I dabble in some heavy metal, however Conor and Matthew prefer much lighter styles of rock. We’re all pretty open to each other’s favourite music, I’ve discovered bands I never thought I’d like. It’s given me a better song writing sense as I have picked up interesting little tricks from different styles of music”. I made the point that when I did the album review just before Christmas, I had definitely been struck by the great blend of contemporary and earlier styles, backing up Scott’s words.

Conor then adds, reflecting on what or who the biggest influences on each of them had been, by saying “Our influences are very broad because we listen to so much music! This is the benefit of being a music lover in 2020. We have the benefit of all the music that has come before and can listen to it just about anywhere anytime, that’s amazing! Our influences vary member to member but collectively we are very influenced by the Grunge era namely Soundgarden, Alice in Chains and Nirvana. But also influenced by more alternative artists like Jeff Buckley, Nothing But Thieves and Arctic Monkeys. We all grew up with classic rock loving parents and family so we also had a musical education that consisted of Led Zeppelin, Deep Purple, Thin Lizzy, The Beatles, Free, The Doors, Queen and so much more! All of these bands contribute to how our songs are written and how they sound. We don’t really try to draw from specific influences, they tend to reveal themselves as we write the songs”

Coming back to the song content, it’s striking that a number of difficult themes are tackled, such as addiction, toxic relationships and death. When asked how important it was for the band not to shy away from these topics, and whether physically writing and recording the album has had a bit of a therapeutic effect, Matthew thinks that people do connect most with lyrics that have something to say and experiences that are real. He adds that “if you can write a song about a difficult subject and the listener relates to it, there’s a real connection there. That’s the power of music”…. and he’s so right in that.

Getting more specific, Scott says that the album title, and the title track itself Casino, is a metaphor for the music industry as a whole. He explains that “making it in the music industry is a gamble, nowadays more than ever. When we decided to make this album we chose to leave our day jobs and put 100% of our energy into making the best album that we could. We feel like this is our chance and we have to attack it with everything and leave nothing in the tank. Hopefully that ferocity and drive comes across in our music”. Conor joins in, making the point that the first single off the album Fame Shame highlights the current fascination with social media and reality TV. He adds “Social media can be a great tool, we all have online accounts, there’s really no avoiding it these days. The flip side is that, as we all know, social media platforms can also be extremely toxic and negative places. I think everyone experiences that to some degree, it’s very easy to start comparing your life to others but it’s not a healthy attitude. It’s important to remember that social media is a highlight reel, not a reality”. Old heads on young shoulders, these!

The current, second, single is Dead Run, which Lawrence describes as dealing with addiction, or more precisely how the people you care about struggle with addiction. He adds “The message of Dead Run is to always be there to help those you love and to allow help from your loved ones if you need it. In our society addiction is treated like a disease and a dirty secret. We need to show more compassion and understanding to people who struggle with addiction”. See for yourself in the video below!

I make the point that the last 12 months have been really hectic for the band, and ask what the most significant event or gig has been for the band (apart from creating the album, natch!) Lawrence describes how they’ve played some really fun gigs in 2019, two of the highlights being support for Eagles Of Death Metal and playing their own headline show at the Garage G2 in Glasgow. He adds “however, the biscuit taker for me was supporting Cheap Trick at the Glasgow 02 Academy – not to mention being jammy enough to sing Surrender with them at the end of their set. Absolutely surreal!”

And then finally, when asked what the band is most looking forward to in 2020, Matthew stresses releasing their debut album. “Of course!” says he, “It’s really a dream come true, to hold the CD or the picture disc in our hands and know all the hard work and dedication it’s taken to get it to that stage. We’re also looking forward to getting back out on the road! The past two years have been really busy for us but we want 2020 to be our busiest year yet!”

And you cant argue with that – the pure joy of performing – crack on, lads! 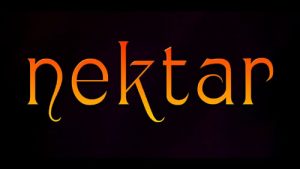 The return of Nektar 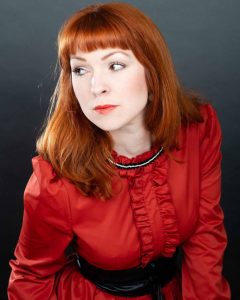 MS AMY BIRKS – ALL THAT SHE IS…